Since she was such a good struggler last time, we wanted to do another tie with Elaine. We sneak up on her, she is sleeping, and we jump on top of her to strap her into a hogtie. Her elbows too, because she is so flexible! Elaine gets gagged tightly with a ballgag deep in her mouth. She tries to struggle but the rigger is much stronger, Elaine does not have a chance!

When Ivan Boulder comes into the bedroom, he find Lucy Purr asleep. She looks very sexy dressed in lingerie, fishnet stockings and highheels. Ivan wakes Ms. Purr up by dragging her to the side of the bed and tying her wrist behind the back. Lucy keeps getting sexier as Ivan adds more rope. Lucy’s lovely fishnet covered legs are tied and she has a big ballgag pushed between her luscious full lips. Ivan places Lucy into a hogtie and uses a rope to pull her head back by the hair. After all this Mr Boulder has one more rope to add and it will make Lucy really unconfortable.

Belligerent Bailey Paige is spoiled rotten by her daddy. Bailey gets whatever she wants and he always gives her everything without her lifting a finger. Her attitude is horrible and she’s totally disrespectful. Finally I’ve reached the end of my rope with her and when she calls out for me to fetch her a drink of water I put a little something in it. Soon the brat girl is asleep and I seize the opportunity to tie her up. Bailey wakes with her knees, ankles and hands tied and cries out for me to help her. When I don’t come running, she realizes it was me who kidnapped her. I watch as she struggles onto the floor her ass exposed and she bends and twists trying to loosen the ropes. The next thing she knows, she’s panty gagged with clear tape and her elbows have been slammed together painfully. I leave my belligerent spoiled off spring goat roped – yes goatroped and choking on the floor whimpering and moaning from the brutally tight bondage digging into her flesh.

Niave 19 year old Swiss girl Diamondly is very happy to have been accepted into a foreign exchange student program. It is her very first trip to the USA and she’s anxious to please me – her host. I tell her that since the girls try to sneak out in the middle of the night they must sleep totally naked and with some restraint. She’s clearly embarrassed and protests a bit as I bind her elbows together behind her back cinching it tightly. Welcome to America dear I laugh. I add a crotch rope securing down through her wrist ropes explaining that this will inhibit their proclivity for sneaking out to have sex with local boys. I finish with a restrictive hogtie and then shove a big ballgag into her mouth. I snap a few pictures of the helpless struggling and sobbing girl then leave to put her up for auction.

Exotic beauty Honey Dew is watching TV when out of nowhere I come up from behind pressing a wet rag over her mouth and nose. She puts up a good fight but the fumes are a battle she just can’t win. Once she’s asleep I strip off her clothing leaving only her tiny white thong on and I begin to put her in bondage starting by tying her ankles together. She awakens very tightly bound and tape gagged laying on the floor. I lie down next to the gorgeous girl and grope her bound body. I roll her over and taunt her with a piece of thin twine then grab her two big toes and wind the twine around them cinching it tightly.

Dia Zerva has been through it all. She’s tired and sore from her work outside. She’s back in the barn and locked to the spike chair. From her scared look she knows it’s going to be another painful experience. Her tits are clamped hard. His handling of Dia is playful, almost experimental. He tries a little of this and a little of that. He even giggles as his torments really get to Dia. She screams and cries. That makes him happy. She needs another change of setting. She’s taken down to the stall. Chained up in heavy metal she’s supposed to sleep, but he just can’t help interrupting her slumber for a good old suck and squeeze.

His brutal management of her breasts encourages her out of her unnatural sleep. Pain is a voice of the spirit rousing itself. Ropes grow luminous in a mind gone dim.

Kidnapped and forced to submit to cruel Pony Girl training at the hands of the wicked Pony Trainers, made to sleep on the cold stone floor of the dungeon, Ariel Anderssen thought her lot couldn’t get any worse. That is, until the Senior Pony Trainer informs her that there is a new buyer in the marketplace, and the Pony Trainers need more subjects. Who was that gorgeous blonde friend they’d seen her with around town? Starring: Ariel Anderssen, Danielle Maye, Zoe Page. 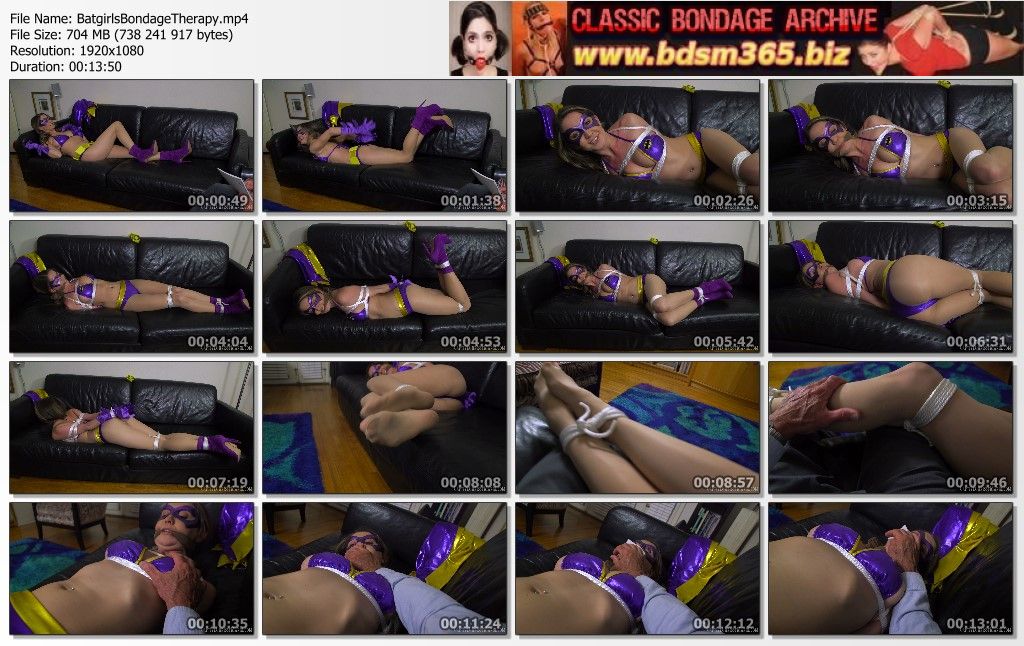 Batgirl is laying on the couch talking to her new therapist. She explains the reason for visit is because Batman thinks she has had a change in behavior. The first clue was the change in costume from the traditional to the more revealing bikini costume. She also explains that Batman thinks that she’s allowing herself to be captured and tied up by low level henchmen because she secretly enjoys being captured and tied up. Batgirl laughs and obviously doesn’t believe Batman’s theory but the therapist wants to test it by tying her up and observing her behavior. Keywords: Chrissy Marie, rope bondage, stockinged feet, struggling, tied up, cleave gag, groping, hand gagging, non-nude, bikini, bound orgasms, sleepy limp fetish, damsel in distress.

Long term bondage is hard. There is barely enough food and water. There is no privacy. Siouxsie pisses between bars in her cage and sleeps when PD brings her a couple of pieces of sheet metal to lay across them. The only interaction she gets with another human being is when PD comes in to see her.

Taylor Brady is asleep in her bed when suddenly a woman rushes in with a gun. Taylor is bound, gagged, and given an enema before being whisked away and taken on a drive to the country. She is led deep into the woods, tied to a tree and left to struggle. Eventually Taylor is taken back to her house and treated to more enemas, butt plugs, and vibrating vaginal plugs.

Samantha struggles on the bed in the sleepsack to no avail. Probably because if you saw part 1, you know whats underneath it… A heavy leather straightjacket, a tight harness panel ballgag, a tight corset, and a black spandex catsuit. She struggles and moans, but shes stuck in that sack for as long as I want her in there.

Samantha is dressed in a black spandex catsuit, then I gag her tightly and rig her into a leather straightjacket. The fun doesnt stop there, I throw a spandex sleepsack over her head and fully encase her in red spandex! Layers and layers…

A beautiful black-haired woman is plagued by nightmares where she dreams she’s the victim of a burglar who strips, binds and gags the sleepy woman. When she awakens, she discovers her dreams were only too real!

Poor Rebelgirl is strapped very tight in a straitjacket. A leather institutional belt is keeping her on the bed. She is struggling until she is tired. There is no way to escape and soon she falls to sleep.

Amaya is sleepy and about to get into some real trouble from her husband, Marty!

It’s late at night, and pretty blonde Kimberly is quietly sleeping in her bed. Her quiet sleep is soon disrupted by dreams of wanton pleasure, her inner slut revealed. Kimberly likes other girls, but even more she wants them to be bound, gagged and subjugated as her own private playthings.

As Told by Serene I had a very weird dream the other night. I had an out of body experience where I could see myself sleeping in the middle of nowhere on a rickety old dirty bed wearing a beautiful satin nighty. A man appeared dressed in a white dirty lab coat. He starts groping and manhandling my limp body.