Arielle Lane has been hired to model some straitjackets for a campaign she’s not quite sure she understands, but she needs the money and it seems easy so she gives it a go. Soon she finds herself strapped tightly in the very restrictive device and being faced with Jennings spreader gag and a blindfold, it’s soon after this and a phone call David makes during all this that she realizes that she’s in fact been tricked and he means to do some very bad things both with and to her. Her ankle binds are released and she’s taken from the room. Category: Bondage, DID, Damsel In Distress, Straitjacket, High Heels, Pantyhose/Stockings, Gagged Woman, Arielle Lane, Jennings Gag.

Dixie Comet, a dominatirx, is introducing Nyssa Nevers to the wonderful world of bondage. Things take a turn though when Dixie confesses that she lures women in with kinky lesbian bondage sex and turns them out as her sex slaves.

Niave 19 year old Swiss girl Diamondly is very happy to have been accepted into a foreign exchange student program. It is her very first trip to the USA and she’s anxious to please me – her host. I tell her that since the girls try to sneak out in the middle of the night they must sleep totally naked and with some restraint. She’s clearly embarrassed and protests a bit as I bind her elbows together behind her back cinching it tightly. Welcome to America dear I laugh. I add a crotch rope securing down through her wrist ropes explaining that this will inhibit their proclivity for sneaking out to have sex with local boys. I finish with a restrictive hogtie and then shove a big ballgag into her mouth. I snap a few pictures of the helpless struggling and sobbing girl then leave to put her up for auction. 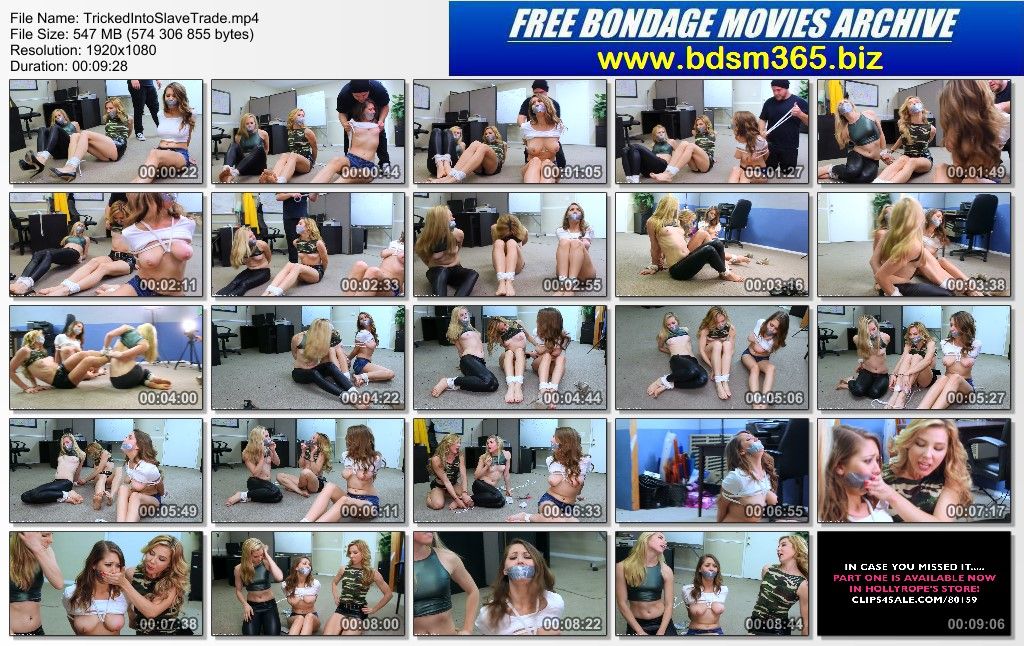 Jewell Marceau and Sinn Sage are helpless, bound, and gagged cheerleaders anxious to show off their talents at cheerleader tryouts. Little did these two girls know that they had been tricked by the sadistic Mistress Gemini who has all along harbored a deep loathing and seething desire to abuse and humiliate cute young cheerleaders for her own personal satisfaction.

Chrissy Marie has been transported from the testing facility to a prison where she has been locked inside of a cell. She finds herself in quite the compromising situation. She is on the floor of her cell wearing a very tight orange spandex jumpsuit. She is very, very tightly bound in an excessive amount of ropes and her hands have already been taped together tightly in microfoam tape. There is a metal chain that is attached to the back of Chrissy’s bindings that has tethered her to her cell. She has a ballgag strapped around her neck, but not yet in her mouth. Chrissy struggles and looks around the room saying “I feel like I’ve been tricked or something.

If you haven’t learned this lesson yet please let my story be a cautionary tale. He tricked me into helping him. It was something out of a horror movie. I woke up in the back of his van. Ziptied with my own pad in my mouth. I didn’t know how long he’d been driving or what he’d done to me while I was out. It wasn’t hard to figure out what he wanted from me. At first it seemed sexual, but that wasn’t it at all. It was something deeper. Something darker. He enjoys my suffering.