Pretty blonde Reagan Lush is a sexy photo model who I’ve hired for a shoot. My partner Jim Hunter comes in to watch the shoot and Reagan gives him some of her snooty comments. I grab her roughly and push her down onto the couch forcing a ballgag into her big mouth. Jim gropes and manhandles her body and I pull out her big tits before I tie her ankles. After some time of struggling on the floor Reagan manages to get her ankles free and she makes a run for it. Jim grabs her in a tight choke hold lifts her over his shoulder and carries her back into the room. Although Reagan struggles heavily, Jim ties her elbows together cinching the rope really tight. We decide to change Reagan’s clothes to bring her to another location.

When Reagan Lush opens the door Jim Hunter and I capture her and force her down onto a chair where we tie her up with rope. We gag her with a rag and seal the gag in with lots of clear tape. Pretty Reagan cries, sighs, moans and struggles heavily but has no chance against the two of us. My gorgeous friend Sasha Foxxx came over to help me tie and mock the stunning Reagan. We double team her adding a tight arm crushing elbow tie and we bind her ankles. Sasha has fun taunting Reagan fondling her big tits and playing with her bound body. We shove a ballgag into her mouth. Reagan protests, cries and struggles trying desperately to get free. Now Reagan is brought to an abandoned building dressed to the nines in with stockings, gloves and over the knee boots.

Chrissy is a detective posing as a secretary to find incriminating evidence that will send her evil boss Captain Knap to jail! He’s been capturing women and selling them off as slaves to shady clients, but just as she found the evidence she needed one her boss’s henchman surprises her! He ziptied Chrissy’s wrists and ankles and pulled her pants down to her thighs for added humiliation! 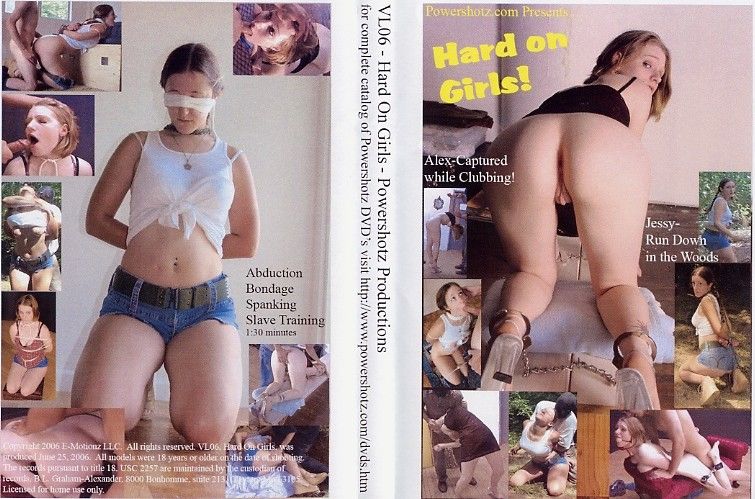 It begins with Alex, coming from a club in a hot mini. She is grabbed, stripped, dominated into submission, cuffed to a bench, made to suck, then doggie style fucked hard. In scene 2, Jessy is run down in the woods, she is captured, roped up tight, thrown over the shoulder and left in a hole. She is discovered by a man who takes her back to his place. Then we find Alex still held captive. She is ball gagged and hogcuffed on the divan so she can be fucked hard. Roped up Jessy sucks…and is bent over a box and fucked with some good butt slapping thrown in.

Some guys like to control their women. But some guys want more than that; some guys want to dominate their women and bind them. The Master in this film does just that with several hot young girls – they’re taken, stripped, and dominated into bondage slavery. They are compelled to endure ball gags, the whipping post, suspension bondage, and being hog tied. 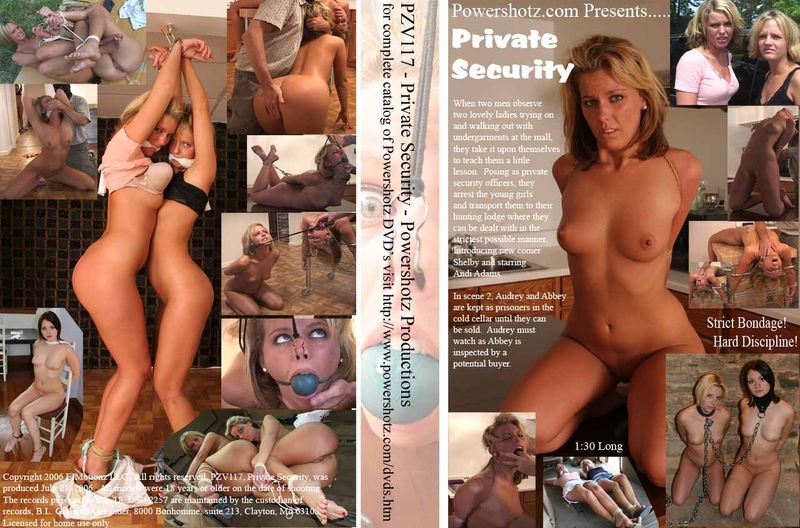 Andi and Shelby are caught by mall security after shoplifting panties at the store. They are cuffed to the floor board and driven into the country for a quick and effective punishment regimen that will insure that they’ll never again stray from the straight and narrow!

When sex pervert sees pretty little Bobbi strutting her stuff in that red cheerleader uniform he hears the register ringing. Cheerleaders are in high demand these days! He takes her home the hard way, with leg kicking rag over mouth seduction. Hog ties her in the van and carries her in so he can prep her for delivery. 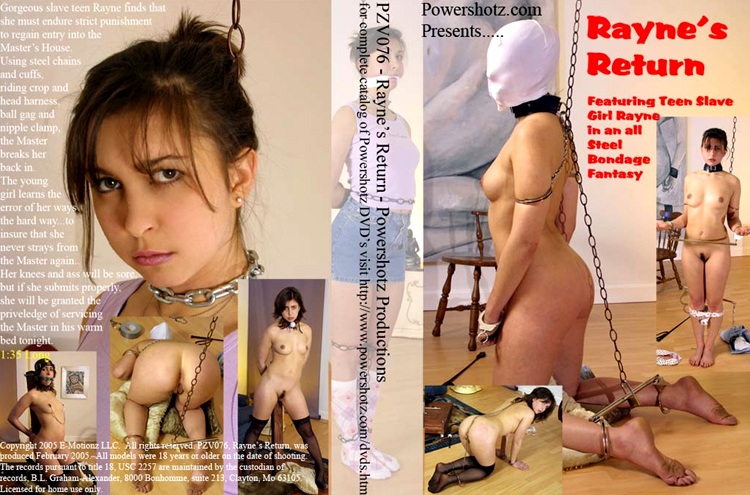 Beautiful Brunette Rayne returns, and as usual, is in way over her head! She finds a masked man waiting for her in her living room, and in moments her hands are cuffed behind her back, and a gag is placed in her mouth! She is completely helpless to stop the masked intruder, and that’s where the fun begins! What follows is a great display of dominance as Rayne is pushed to the limits by her Master. 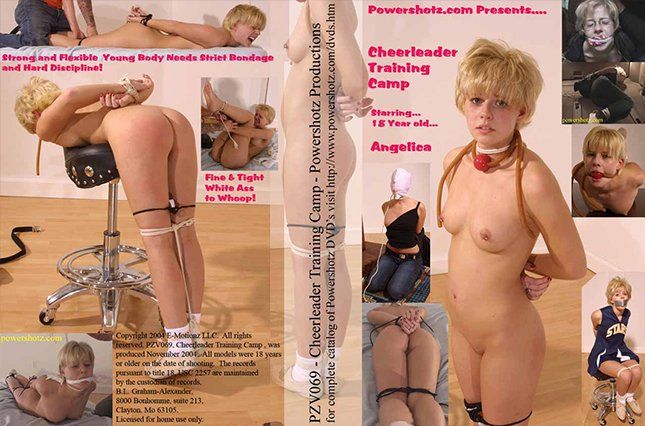 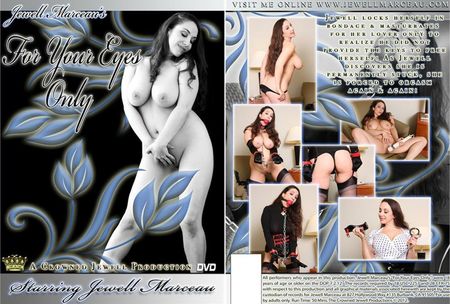 Jewell Marceau locks herself in bondage and masturbates for her lover only to realize he did not provide the keys to free her! As Jewell discovers she is stuck, she is forced to orgasm again and again!

Cop Ashley breaks into the lair of the bad bondage guys and finds out why these guys are professionals. Within seconds the main bad guy grabs her, throws her down and controls her easily. Well, well, well… Now what to do? She might have back up! Best get her under total control then and make some calls. So he rolls her over and cuffs her with her own cuffs. While she is laying there all sexy and and helpless, he thinks maybe there is time for one more slave auction before leaving the area. After removing most of her clothing, he hogties her and goes to make those calls. Ashley the cop does not just lay there and take it though! She struggles and struggles and slowly gets her hands free! But she still has her ankles and elbows tied!

To her horror Ashley Lane realizes her purse was in her car as well as her cellphone! The bar is closed and so is everything else in this small town. Along a deserted warehouse area in the city Ashley is repeatedly stopped by Johns thinking she is a hooker. Now the bad news. Really dangerous guys stop. Undercover cops. They tell her they are going to take her in for prostitution. All the while Ashley is pleading and trying to get them to understand that she is not a hooker and that she only needs a ride! They read her her rights, cuff her and put her in the car. As they drive along, poor Ashley practically begging, she notices that they are not going the right direction. Are they really taking her to be arrested? Or something worse?

Now Chrissy Marie and Khristall are both naked and tightly hogtied on the kitchen table. Both of them have apples shoved in their mouths and Chrissy now also has “For” written on one foot and “Sale” written on the other foot just like Khristall. There is still another camera in front of them filming them for the bidders. For the rest of the video they desperately struggle to escape before it’s too late! Plenty of close ups of Chrissy and Khristall’s feet as well as close ups of their faces mixed in as they both drool heavily from their apple gagged mouths! It doesn’t look good for these two bound barefoot beauties! Keywords: batgirl, chrissy marie, khristall, bound, cleave gag, barefoot bondage, struggling, handcuffed, hogtied barefoot, apple gagged, drooling, off screen tying, rope bondage, foot fetish.

Schoolgirl Chrissy Marie has been captured and is being held again her will. Her ankles are pulled back towards her wrists and they are tied close to each other with string, stretching her into a strict backbend position. She can barely move and is completely exposed and vulnerable in this position which is exactly what he was aiming for!

IR’s head is pulled back when I chain her harness gag to her toe cuffs. The metal cuffs and chains are already digging into her tender flesh, but it really digs in when she jerks and twitches from the bastinado she is now receiving. I use a thin wooden paddle to smack her soles. I roll her on her side so I can get a new view. I like to see the tightness of the chain drawn up tight between her legs. I start slapping her feet once again. I love watching her squirm while helplessly cuffed and gagged. Now that she is on her side I clover clamp her nipples and then pull them tight and padlock them to her collar. I leave her once again to endure her inescapable steel bondage.

Serene Isley arrives dressed in pantyhose, lingerie and high heels and finds a catsuit. Stripping off her bra she removes her shoes and slowly slides her catsuit on. Moving over to the couch she concocts a plan to fool the man of the house and then finds some bondage gear. After stashing some of it she ballgags herself and talks her plans out loud a bit before taking a large piece of cloth and OTM gags herself with it. A cleave gag and blindfold are swapped and followed by some handcuffs.

Mia Vallis & Serene Isley – From Bondage Model to Bondage Slave! With her limbs secure Mia Vallis shoves Serene Isley over the couch and then goes after her slowly closing in and groping her a bit before adding more zip ties to her thighs. An elbow zip tie is added then a ballgag and then Mia leaves her to struggle for a bit. When Mia returns she has a ton more zip ties and gets to work covering Seren body with them pulling each one cruelly tight. 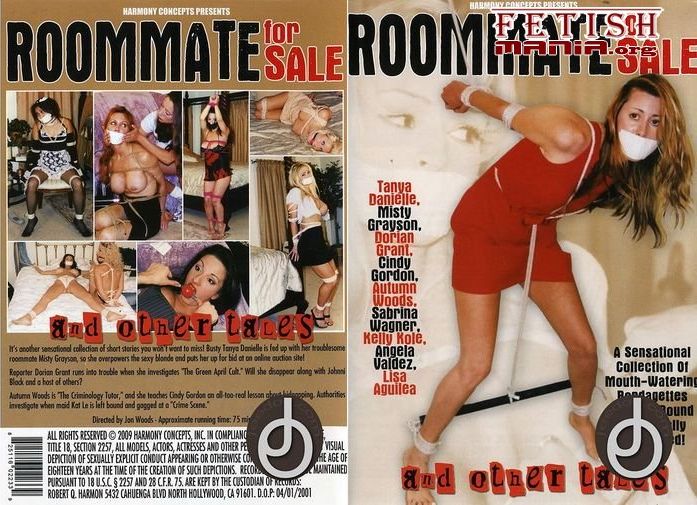 Four tales of bondage hijinks: In the first, a woman is so mad at her roommate that she ties her up then puts her up for sale on an internet auction site; in the second a reporter is captured by the cult she is investigating; in the third an instructor tries to give a student a real-life lesson in abduction and in the last, two police detectives investigate a crime scene while the bound and gagged maid mews indignantly. Starring: Tanya Danielle, Cindy Gordon, Misty Grayson, Kat Le, Autumn Woods, Dorian Grant.

Beautiful bondage video with bound blonde slave. Her master tries various cruel ballgags on her as well as a leather mask which expands her jaws nicely!

This Devon video is entirely devoted to self-bondage. Busty blonde girl binds herself, using a variety of devices.