Terra Mizu wears a sexy silky one piece Speedo swimsuit and some extra shiny dance tights. First we strap her in a leather armbinder and belt her upper body to hold her arms in nice and tight. Then she is gagged with a strict trainer style ball gag and blindfolded. Next we lay her on her back, stretch her long legs down, and frogtie them with thick leather straps.

A bound and gagged Devora is pushed into the living room where she is groped and abused before being further tied up on the floor. Drooling past her ballgag, she must wait for Jay Edwards to return – knowing that he will administer further abuse upon her muscular and fit body. Lashed to a stool, our sexy captive is subjected to tit clamps along with onscreen gagging and onscreen elbow bind. She grunts as the ropes draw her muscular arms all the way together behind her back.

Jay Edwards – You Seem All Wound Up Today… Pretty girls, clever bondage, great lighting and provocative lingerie on three hot young women. Remember those psychologically-impressible comic book scenes in which some of the ropes of the bound subject would be treated with some liquid to make them draw even tighter? Well, these scenes look like that ‘after’ effect – the ropes in this video might well have been treated with whatever that mysterious stuff was – the ropes are that tight! 11 bondage positions including lingerie, topless and nude, hose and garter belt-only scenes; lots of crotch ropes that are are practical as well as decorative; a gamut of gags from cloth and leather to ball and harness-ball gags; plenty of elbows together; several toe-ties, and intricately woven breast bondages.

Two young women are part of a protest in a South American jungle paradise. When one is captured by a paramilitary group the other tries to break her out. She is unsuccessful though and she too is bound and tortured. Great ties and suspensions for them this time! A classic oldie bondage movie.

Join Spi for a two hour journey to the brink of submission – we proudly present the very best of self-bondage! Beautiful girls gag and restrain themselves for your pleasure and their own – gurgling and drooling from behind tight gags, bound in chains, rope, handcuffs or leather in various self-bondage scenarios!

A foreign princess (Alicia Parks) is being held by an international spy (Alexis Taylor), but the Danger Ladies are on the case. Unfortunately, Jewell Marceau and Jordann Scott both fall into Alexis’ clutches, and it’s up to La Femme Kelly to save them! Alexis is subdued, but she overpowers Krissy Taylor and Caroline Koh and escapes for revenge. The villainess catches Jordann and Jewell while they’re practicing their escape artist techniques and Kelly Ashton comes to their rescue again. But Alexis is ready for her this time! Then a final twist finds the villainess and all in dire peril! Cast: Kelly Ashton, Jewell Marceau, Jordann Scott, Alexis Taylor, Alicia Parks, Caroline Koh and Krissy Taylor. 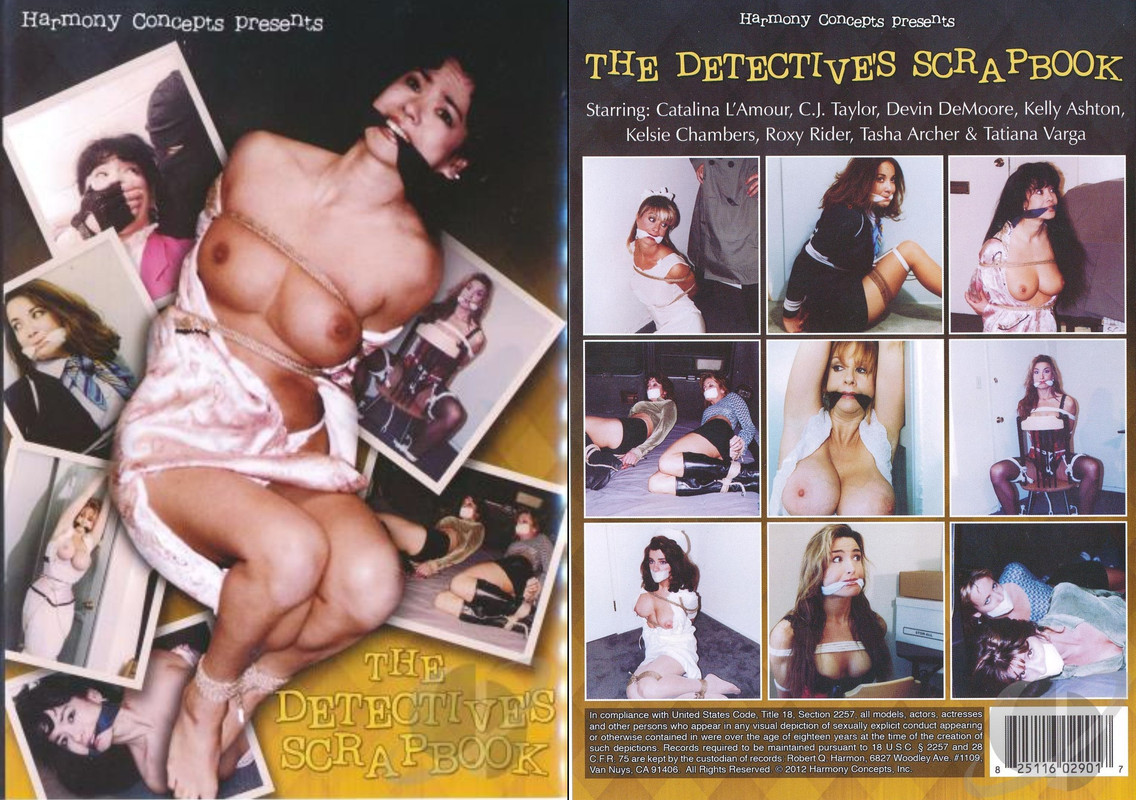 Private eye Tatiana Varga is from a long line of detectives, and she talks about her illustrious family, taking us through the 20th Century as we re-live exciting scenes from her’s cases. We begin with buxom Lady Roxanne (Roxy Rider) as the bait in Professors Ayresteel’s trap for his arch-nemesis, master detective Sherlock Paradise, then ninjas grab exotic Devin Demoore as part of an extortion plot. Gorgeous Catalina L’Amour is a Golden Era Hollywood starlet nabbed as part of a publicity stunt that turns real, and it’s up to Nick Paradise to save her! Hard-boiled P.I. Sam Paradise is looking for Kelly Ashton in “The Case of the Missing Model,” and flower- C.J. Taylor and Tasha Archer hope Peter Paradise can free them when they get in over their head with some long-haired, radical lunatics. Cast: Tatiana Varga, Roxy Rider, Devin Demoore, Catalina L’Amour, Kelly Ashton, C.J. Taylor, Tasha Archer and Kelsie Chambers. 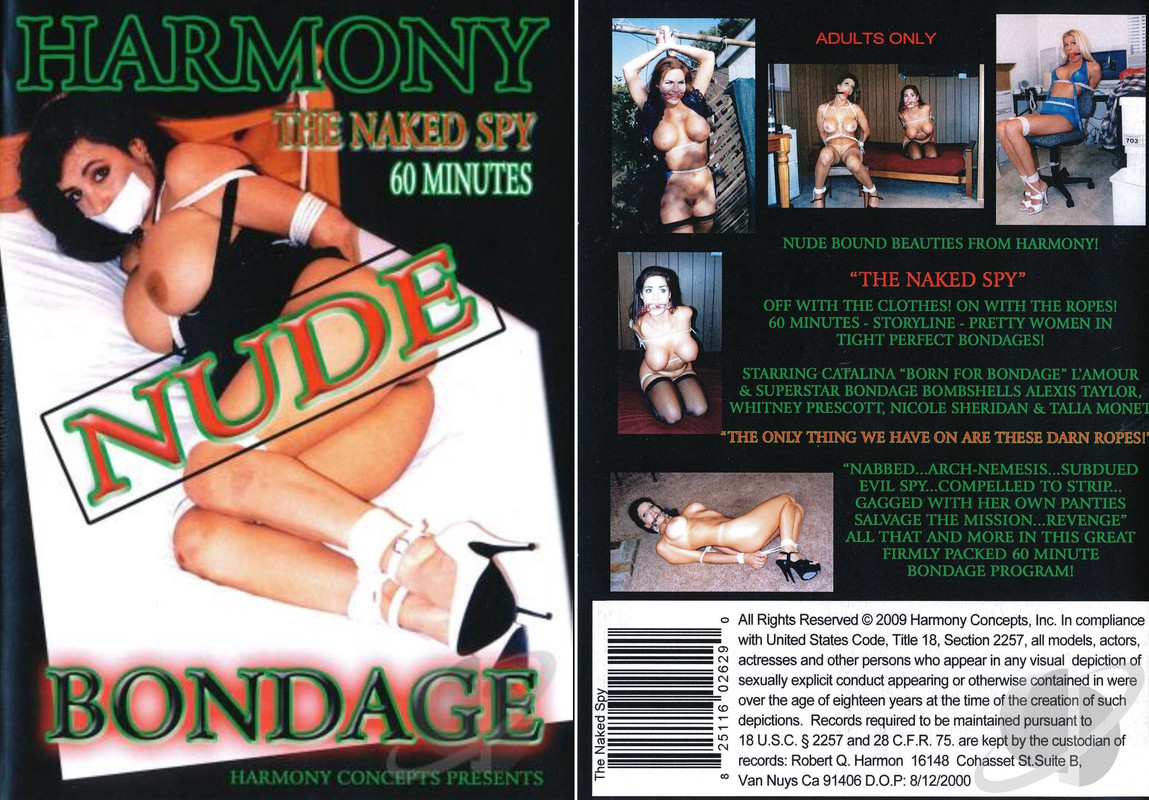 Naked Spy: Off with the clothes on with the ropes! An evil arch-nemesis is gagged with her own panties and perfectly subdued! Starring: Alexis Taylor, Catalina, Nicole Sheridan, Talia Monet, Whitney Prescott.

If Harmony gave out Mvp awards, Kelly Ashton would be the hands (tied) down winner of this year! This statuesque beauty burst onto the scene as Maiden America, a blockbuster role which put her on the cover. Now this Amazonian Goddess is making her debut as an independent producer in this “can’t miss” video! On the reality side, Kelly tells you about herself, talks about her feelings regarding fetish work, her love of role-playing games, high-fetish clothes, and tight, restrictive bondage and gags. On the fantasy end, Kelly Ashton performs in five exciting roles. Ms. Ashton plays a security guard in seamed stockings bound by burglars, portrays a tightly-tied rubber-maid, and she’s med-wrap-gagged and strictly secured with black PVC tape. Zipped into a sexy rubber dress, Kelly stuffs a large rubber apple in her mouth and ties it in with a red rubber strip before being tied with more squeaky rubber strips and tubing. And Kelly even tries her hand at being Spellbinder, tying on a crotchrope and locking herself with handcuffs and legirons!

You want humiliation, then don’t miss out on the pretty Cameron bark like a dog! She even cries like a baby with a crotch rope strangling her pussy! All lovely young bitches, stripped, whipped, gagged and bound that are waiting in bondage just for you!

This girl, Clarissa must have no idea what she signed up for. Right from the start, we can see her already tied up, lying helplessly on the bed. Her eyes pleading to get her out of here!